Since it’s spring break across the country for many kids – thought this was a perfect time to encourage everyone to take advantage of this free time and get active with your kids!

It is obvious that obesity is an epidemic in the United States. Nothing breaks my heart more than seeing an obese child, especially because It is 100% preventable.

Please teach your kids, nieces, nephews, grand kids the importance of a healthy lifestyle. There are so many risks that come with obesity and a sedentary life. Below is an clip of an article I found and based on a study, kids in the ’70s were fitter and healthier than kids today.

Study: The Cardiovascular Fitness of Kids Worldwide Has Declined Since the 1970s

Many kids today can’t run as far as their parents could when they were children, according to a study presented Tuesday at the American Heart Association’s Scientific Sessions 2013 in Dallas. Researchers looked at 50 studies between 1964 and 2010, which covered more than 25 million children ages 9 to 17 in 28 countries. Each of the studies was about running fitness, because, although there are many different kinds of ways to be fit, “the most important type of fitness for good health is cardiovascular fitness, which is the ability to exercise vigorously for a long time, like running multiple laps around an oval track,” states Grant Tomkinson, lead study author and senior lecturer in the University of South Australia’s School of Health Science, in a press release. In analyzing these studies, researchers found that the cardiovascular fitness of kids around the world has lessened since about 1975. Specifically, the cardiovascular endurance of children in the United States dropped about 6 percent per decade, between 1970 and 2000. And today’s kids are about a minute and a half slower in a mile run than kids were 30 years ago, according to the press release.

Kids need to get moving, Tomkinson says in the release, for their current and future health. “If a young person is generally unfit now, then they are more likely to develop conditions like heart disease later in life.”

Help your family and yourself from becoming apart of this statistic!

Get up, get out and get active… 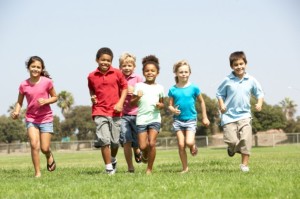 Here is a link to the article: http://health.usnews.com/health-news/articles/2013/11/20/kids-today-are-less-fit-than-their-parents-were

Your goals, your program

Email maketimeforfit@gmail.com today to get your personalized workout program tailored to you and your schedule!